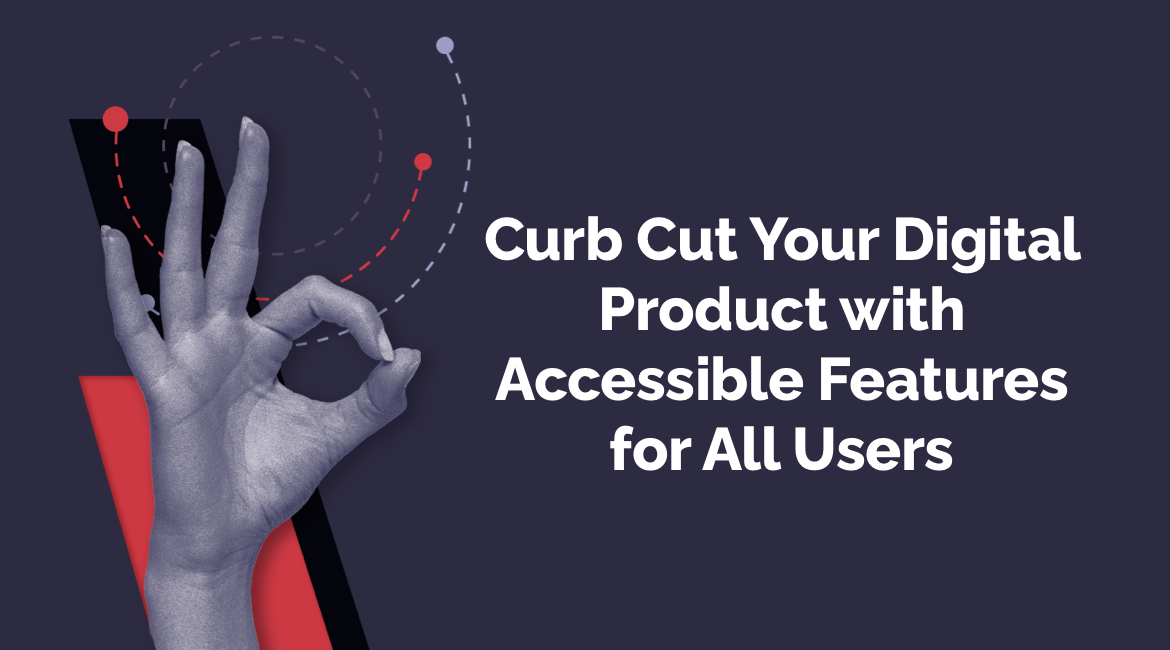 When getting started in accessibility, there are seemingly endless options, investments, and benefits of having a truly accessible digital product. But at the core, accessibility is a requirement for everyone. Many of the standards for one population are now so universal, many people who live without disabilities still benefit from and expect certain accessible services.

What Is the Curb-cut Effect?

The original use of the phrase came from the curb cuts that exist on sidewalks. They act as miniature ramps for easier entrance and exit of the sidewalk for wheelchair users, but they are now universal and useful for strollers, bikes, scooters, shopping carts, and more.

You may also be familiar with closed captioning. Although your dad may hear perfectly fine, he still may prefer to read the TV than watch it in order to not miss a single word of his favorite “Vikings” show.

In an April 2019 study from Verizon Media, 80 percent of consumers are more likely to watch an entire video if it has captions. And 80 percent of people who use captions aren’t deaf or hard of hearing.

A more recent feature was added to Zoom added a recent feature that provides closed captioning during conference calls. This allows all users to participate in the digital workspace, even without audio.

Examples of the Curb-cut Effect in Web and Product Design

Color contrast vitally serves people who may have vision impairments like color blindness, myopia, hypermetropia, diabetic retinopathy, macular degeneration, and more. For people with visual impairment, color alone is not enough to distinguish between two separate items. There needs to be enough contract between two items to more clearly see the difference between the two.

If you have 20/20 vision, you may think this doesn’t apply to you. However, color contrast on digital devices becomes important for all vision states in situations such as bright sunlight or other poor lighting conditions, very small screens like a smartwatch or phone, and low-quality monitors. (Remember that episode of “Game of Thrones” that was too dark for anyone with a normal TV to see who was winning the battle? That kind of issue can show up with low contrast text on screens, as well.)

Alt text, short for alternative text, was originally meant to describe functional or informational images on a page to users who may not be able to see them. However, alt text has become useful for users who aren’t necessarily visually impaired.

In 2019, Facebook and Instagram experienced an outage that prevented images from loading. Every user saw alt text in place of images, some of which was generated by Facebook’s AI. Even if some of the alt tags were guesses on Facebook’s part, having some description of the missing images did help provide some context for users that weren’t visually impaired.

This also becomes relevant if users have a slow or unstable internet connection, or if your application or website’s server has a hiccup. Alt text can help all of your users have some frame of reference for images that aren’t loading properly.

Still not convinced? Alt text can also help search engines index your images correctly, and can even help improve your website’s SEO.

Ok, now that you’re all gung-ho about adding alt text to every image you upload, we do want to mention a couple caveats. First, not all images should have alt text. Decorative images don’t add new information to the content of a page, and therefore do not need alt text.

For example, the information provided by the image might already be given using adjacent text. Or perhaps the image is a graphical accent, included to make the website more visually attractive (such as the textured background in the image below). In the case of decorative images, use an empty alt attribute.

The second caveat is that you do not want to have duplicate alt text. In other words, if you’ve written a description in the body text or caption, you do not need to list the same description in alt text form. This causes “auditory clutter” for screen reader users.

Although there are plenty more examples of the curb-cut effect, the last one we’d like to cover here is something most users may not think about if they are not in the development business.

Cleaner code describes best-practice techniques in a digital environment. This is often sought after simply to improve performance, which should be a goal for most any digital space. However, there are tricks built inside of clean code that also improve accessibility – for disabled and non-disabled folks alike.

Screen readers and other assistive technologies rely on the underlying HTML markup to convey meaningful information about the structure and content of web pages. This means that it’s very important to structure your site or product’s HTML correctly.

However, there are benefits beyond accessibility when your product is built cleanly and properly. Sites built semantically have cleaner code, load much faster, and perform better for all users. A clean semantic structure makes it a lot easier for search engines to crawl your website, which can lead to improved SEO performance.

And semantic HTML also makes it a lot easier for new developers to familiarize themselves with the product’s codebase more quickly. In other words, accessible code is clean code, which improves user experience, searchability, and ongoing development. Pretty cool!

Accessible products are not just for people with disabilities. The curb-cut effect has resulted in the widespread adoption of accessibility standards to the point where all user groups now expect this level of accessibility. Need help getting started? We’ve got you covered.