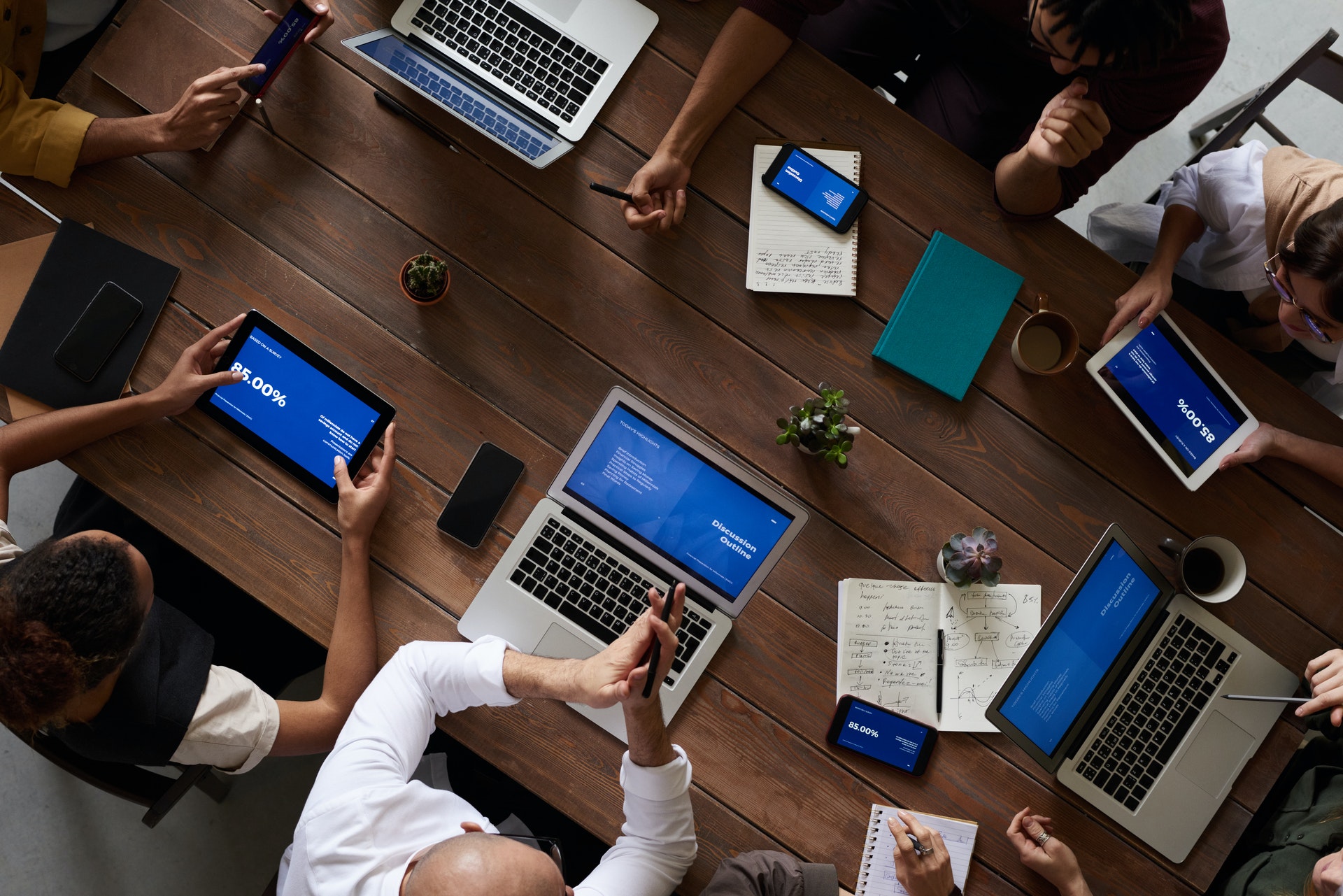 You don’t have to be immersed in tech to be familiar with 5G and the Internet of Things (IoT), two prevalent buzzwords that are no longer mutually exclusive – we are now staring into the vast face of 5G IoT, a powerful combination of speed, technology, and opportunity.

There’s a ways to go before we see the true capability of this pairing, but continuing discussion of their potential also has brought to light a lack of knowledge of these singular terms among the general consumer population.

5G stands for fifth-generation cellular wireless, and will replace 4G as the standard for wireless connectivity. It has only been around for a relatively short period of time, with wireless carriers launching beta-level 5G network connections to the public by the end of 2019 or beginning of 2020; however, consumers are already so familiar with the term that many believe their smartphones are 5G-capable.

Conversely, many consumers say they don’t understand what the IoT is, and yet own connected, IoT devices like FitBit or a smart speaker like Google Home or Amazon Alexa.

The knowledge discrepancy could be problematic because of the significant changes on the horizon, but the reality is mainstream usage of 5G will happen much more quickly on handheld devices like cell phones and tablets. Major carriers are already advertising 5G capabilities to the general public, and cellular users are going to embrace 5G easily for its faster download speeds and connections that will make posting photos and sending emails even easier on-the-go.

What Does 5G Actually Mean?

By the law of progressions, 5G will be faster. In comparison, 4G tops out at around 100 megabytes per second (Mbps). 5G, on the other hand, is one hundred times faster than 4G at 100 gigabytes per second (Gbps), which for the wireless consumer equates to a 6-minute download on 4G basically being cut in half.

5G and IoT together, on the other hand, is a pairing much more relevant to industrial audiences concerned with smart manufacturing – innovation, new technologies, and leveraging the IoT and 5G to make operations more automated and efficient. 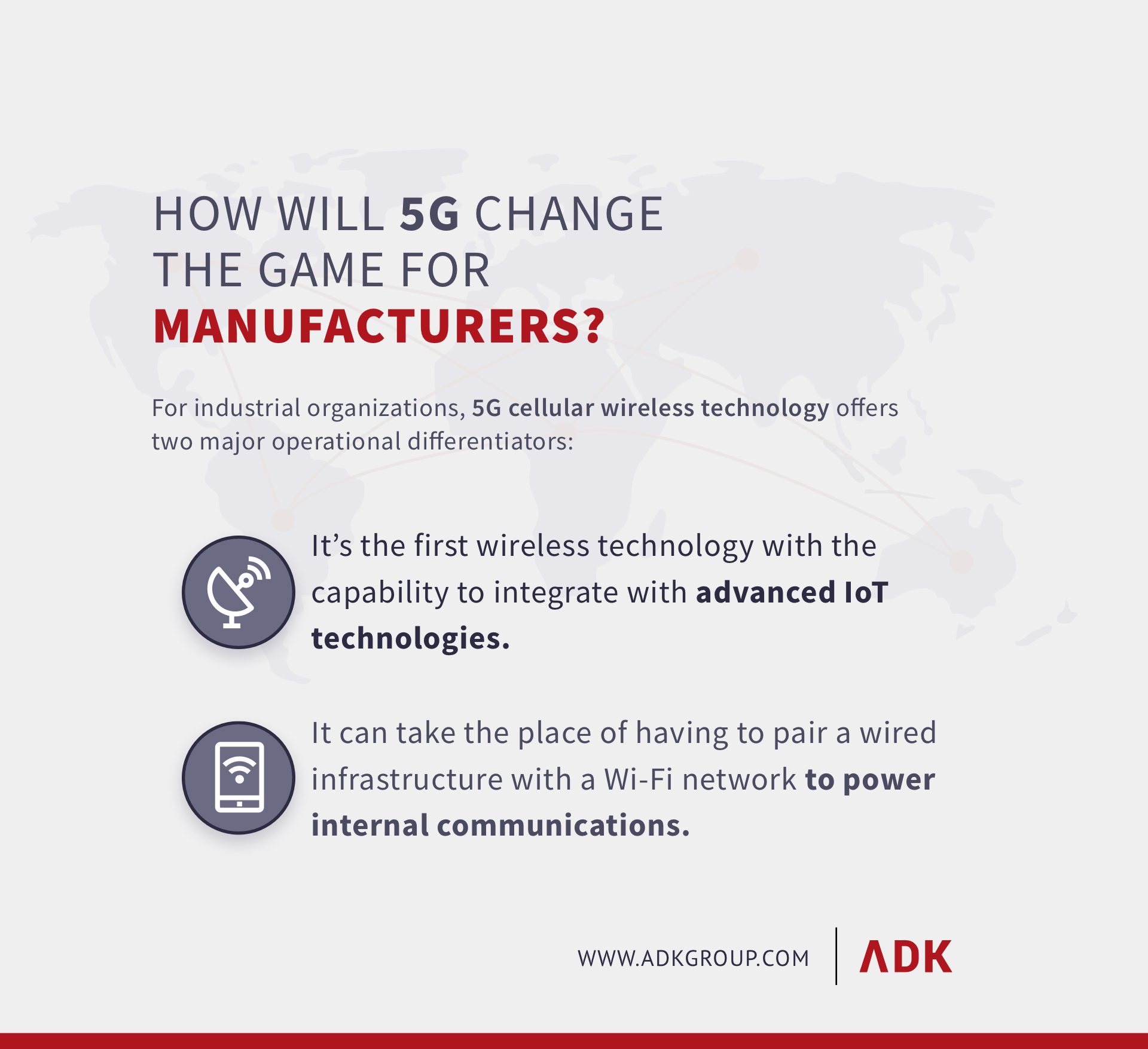 There are two significant differentiators for 5G where industrial organizations are concerned:

These opportunities alone mean big advancements for productivity and efficiency within industrial organizations.

The bulk of devices on the IoT right now are actually 2G, notes Clark.

Why? It’s all about power.

“The greater the speed, the more hungry those devices are for power,” Clark says. “The advantage of slower speeds is you’re able to be much more efficient. You don’t need ‘super-fast’ to run a credit card transaction, for example. There’s a greater advantage for slower but better power.”

So, 5G might not be the top choice for budget-conscious entities like municipalities that are looking to add infrastructure to their smart cities, for example, but for industrial organizations considering how to leverage technologies like digital twins, 3D printing or augmented reality to enhance their digital transformation strategy, 5G Internet of Things creates exciting new growth opportunities.

The Potential and Power of 5G IoT

There are numerous benefits industrial organizations can expect to see from 5G IoT:

PCMag calls 5G “an investment for the next decade” because we won’t really see what it’s truly capable of for a few years. With 5G speed and capability, up-and-coming IoT devices have greater performance potential, and IoT devices we haven’t even fully developed yet have greater launch potential.

But as of right now, we don’t know what the standards for 5G will be, or what applications it will enable, which is a big part of why its pairing with the IoT is so intriguing.

Another New Player on the Field: What Does Wi-Fi 6 Mean for the IoT?

Wi-Fi 6 is the next iteration of wireless, and also is expected to improve internet signal strength, especially in traditionally challenging areas like congested cities or crowded homes and buildings.

5G cellular does have the potential to replace Wi-Fi networks since it can power multiple smart devices at once. But this potential isn’t necessarily a precursor for a 5G / Wi-Fi 6 showdown. The two technologies can coexist, especially considering that a complete replacement of Wi-Fi is highly unlikely. If 5G becomes unavailable for some reason while powering a critical IoT device, Wi-Fi remains a logical fallback.

Similarly, Wi-Fi 6 on its own won’t have a different type of impact on IoT devices than 5G; rather, the fast speed and capability of these two technologies simply being available means big things for the IoT.

IoT devices will likely embrace the opportunity to provide constant connections that transmit greater amounts of information with less power and a longer battery life. Instead of competing, 5G and Wi-Fi are two big ways we’re enabling the technology of tomorrow.

Are There Potential Dangers for Having a Need for Speed?

There are billions of IoT devices all around us; many operating in ways we don’t always realize.

Unless you’re Keanu Reeves, the addition of 5G’s promised lightning-fast speeds to the IoT may cause some consternation. After all, there are existing security concerns with the IoT – smart cities, for example, can face risks with cardholder data being used on smart meters (many of which are managed by third parties), and organizations running vital operations over improperly-secured connections are at risk of breaches that could harm the business or, worse, public safety.

There are also concerns among the general public about how these devices collect information. While NPR and Edison Research estimate that there are nearly 120 million smart speakers in households across the U.S., consumers have expressed concerns about these devices “listening in” and collecting information through conversations. Couple that with the Cambridge Analytica scandal on Facebook and the attention that drew to unauthorized data collection, and it’s no wonder people are wary.

These security and privacy challenges have been leading discussions among infrastructure security providers for much of this decade, so adding 5G to the mix may seem like turning a blender on full-speed without the lid.

Clark, however, says there aren’t any greater security risks with 5G than currently exist with 2G-connected devices.

“Security concerns come from people implementing the device poorly,” says Clark. “The biggest security risk on the IoT is that it gets built, but regardless of the network it’s on, attackers can still wreak the same havoc. The hack doesn’t happen because of the network – it happens because the implementer of the protocol running over the network left it unsecure.”

What Does 5G Mean for IoT?

While it’s easy to leap to truly next-generation technologies like self-driving cars when talking about the potential of 5G IoT, there are many technologies that are already at that level.

“Forget self-driving,” Clark says. “Most modern cars have so much capability to do even more.”

It is these modern capabilities that allow for many manufacturers to operate smarter and more purposefully. Connected cars allow manufacturers to collect data that they can then use to make those cars smarter. The same principle applies across many industries – the ability to make better decisions based on real-time data that can result in increased customer satisfaction.

“The whole spirit of the IoT is how do we instrument the physical world so we can have access to data,” says Clark. “The immediacy of data allows us to access information that we couldn’t before.”

Adding 5G wireless technology to IoT devices simply ups the ante in terms of what’s possible, and with a multitude of enterprises already pursuing some form of digital transformation, it only furthers the possibilities.

“It’s all about efficiency using data,” Clark says. “When I look at these network evolutions, it’s allowing us to get more IoT devices out in the field so we can ask the fundamental questions and make things better.”

Healthcare and the Digital Landscape with Michael VanRooyen