Highly agile development sprints enabled UPOP to overcome an ultra-tight timeline and launch a custom tool in time for the school year.

A small core of MIT staff uses the tool to guide students through every stage of the year-long UPOP program – ensuring that no student falls through the cracks.

Every year, eight UPOP staff guide hundreds of MIT sophomores through a year-long career mentoring and internship placement program–using a tool built in 2007. As enrollment increased and the program outgrew its tech, staff struggled to pick up the slack.

Entry into UPOP is highly competitive. In addition to all the usual trappings of career mentoring programs – help with resumes, interviews, etc. – UPOP students are paired with industry leaders who act as mentors, helping students pursue the career they want.

In 2007, a student built UPOP’s legacy custom program management tool. The tool itself is impressively built and has served UPOP well for over a decade. As the program expanded, however, UPOP outgrew its legacy technology. As time went on, increasing numbers of tasks had to be handled manually by staff.

By the time UPOP approached ADK in March of 2020, the tool was overburdened by years of legacy data and failing to meet the needs of the program.

UPOP needed a new tool, and they needed it quickly. It was late March, and students would need to start applying to the program in early August.

Four months isn’t much time to plan, design, build, and test any large application – let alone a program management tool needed to support hundreds of students on launch. To build on such a short timeline, ADK adopted a highly agile approach.

Starting with a few wireframes and a general direction, ADK and UPOP knew there was only one way to meet the deadline: Kickoff full development on day 1.

To do this, planning, wireframing, and designing were done in parallel with development from start to finish. While engineers built out one feature set, ADK’s strategists worked closely with UPOP to plan the next one.

The approach worked: define, wireframe, design, build, repeat. By the first week of July, development was complete and the tool was ready to undergo rigorous testing.

For a live launch like the UPOP tool, testing is as important as development. Finishing development in July allowed the tool to undergo a month of rigorous quality assurance to ensure that it was airtight for students. 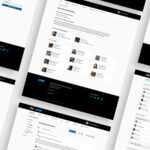 With a tool supporting every aspect of the UPOP program, staff can focus on what matters: helping students land their dream job.

The tool has also helped students. Students can use the tool to RSVP to events, track their progress via a dynamic milestone tracker, communicate directly with staff, and submit important documents for review. Industry mentors also use the tool to communicate with students.

While a challenge, the successful completion of the project in such a tight time frame enabled the UPOP community to realize the benefits from day one.

This was especially important in the context of COVID-19. UPOP’s new program management tool was nearly complete when MIT made the final decision to go remote for the duration of the fall 2020 semester. Indeed, MIT only released a plan the week before ADK finished development.

So ADK and UPOP made sure of one thing: the tool would be effective under any conditions.

Building for resiliency also means building for growth. As UPOP continues to grow, the program management tool is built to grow alongside them. 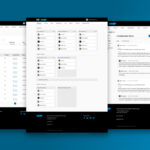 We’re no one-trick pony. Check out some of the other problems we’ve helped solve.

Financial advisors at Broadridge were using multiple software interfaces to manage client accounts, which made it difficult to navigate information and quickly gain insights. So ADK developed a prototype solution for a unified user interface with a streamlined and more effective user experience.

Raising awareness about suicide risk with an educational online portal for schools worldwide.

Making millions of educational resources more accessible with a fresh approach to a massive digital library.

JSTOR, a digital library for scholars, researchers, and students, needed a common digital language to streamline its platform and user experience. We took a blank slate approach to reimagine the entire user experience of the JSTOR digital library, from resource accessibility, to the look and feel, to light and fast site loading across all devices.